When I think about my acting memories in Italy, TRE STRANIERE A ROMA is prominent in my mind : Rome, my favorite city, the generous sun of the 1958 spring, the warm friendship between actors, the intelligent and sensitive advice of our director Claudio Gora. Those were ideal conditions to make this comedy an unforgettable experience. 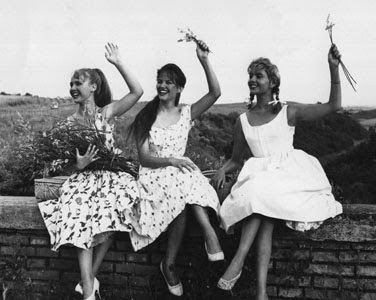 Three young girls from Milan ( Yvonne Monlaur, Claudia Cardinale, Françoise Danel ) travel to Rome for the Easter week-end.
They decide to pass as rich Danish tourists in order to attract the attention of three naïve boys from Rome.
After swinging dancing and drinking parties, they end up giving themselves away. Soon, funny misunderstandings and fights between young couples become burgeoning idylls under the shade of the roman countryside’s thickets.
At the end of the week-end, the three strangers take a train back to Milan, leaving behind, on the platform, enamored Romans, with promises to see each other again.


At the time, I was under contract with producer Franco Cristaldi, as was Claudia Cardinale who had just shot Mario Monicelli’s excellent comedy BIG DEAL ON MADONNA STREET.
Claudio Gora had remarked me in my first Italian movies. I was lucky to work under his direction. An actor himself (1), he had very stimulating views about acting in front of a camera. We had a lot of extended shots with a lot of dialog. Gora always preferred the first takes, which preserved the freshness and spontaneity of acting. 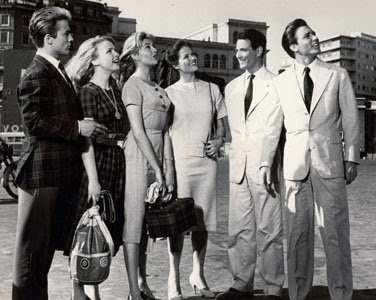 He had a small crew and, therefore, could move very easily in the streets of the capital city. We were shooting day and night, sometimes take after take during 24 hour working days (2) ! I remember a very early morning when I came back from the set for a quick shower before changing and returning to shoot in mid-morning !

The sustained working rhythm was very similar to the three girls’ escapade from Milan.
We worked with a lot of enthusiasm, sometimes under scorching sun.
During some afternoons, we would gladly have exchanged our spring outfits for beachwear !

The other star of the film was Rome, its monuments, but also its nightlife. A moving testimony to the Dolce Vita. At the end of the long cabaret scene, shot in the popular night club Grotta dei Piccioni with the singer Marino Baretto and Tamara Lees (3), the three girls, a little drunk, are falling asleep on the seats of a beautiful convertible, parked in a nearby street. Claudio Gora suggested that I hum the Milanese song :" O ma bella Madonina" with a kitten in my arms. This amusing scene remained on the cutting floor. Perhaps it revealed a little too early, and under a new light, the Danish girl I was supposed to be !

Thinking about it again, the spirit of this comedy about carefree youth in the backdrop of Rome reminds me of a great William Wyler classic : ROMAN HOLYDAY, where reporter Gregory Peck was having a dashing romance with a princess on the run who carefully hid her true identity. That princess was Audrey Hepburn. An admirable actress who was very influential in my own desire to join this beautiful profession.

1 – In the fantasy genre, he shared top billing of UN ANGELO PER SATANA with Barbara Steele
2 – Notably for the sequence of the long walk through Rome
3 – Tamara Lees did a lot of stage work in Italy and was a leading lady in dance revues.