One of the last Hollywood superstars passed away on march 23rd. I think I have seen all of Elizabeth Taylor's movies. I was impressed by such a great actress. Particularly by her portrayals in adaptations of Tennessee Williams.

During my movie career, I was fortunate enough to meet some great Hollywood stars and never failed to express my admiration for them. We met at Hotel Excelsior in Rome during a cocktail, while she was shooting the Mankiewicz epic odyssey : Cleopatra.

At the time, I was living in Rome, shooting at Cinecitta. Most of the stages were occupied by the Twentieth Century Fox super production. The complete film crew was present that night. I was wearing for the occasion a very pale pink muslin dress. She wore a very similar gown. 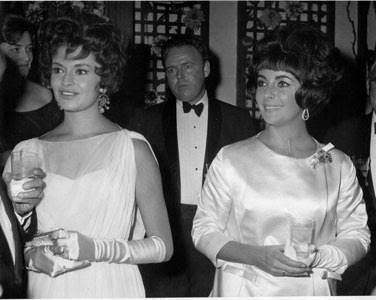 We were introduced and I told her how thrilled I was to meet her, for all reasons above. I glimpsed a certain uneasiness in her magnificent sharp eyes and thought it was caused by all the media pressure. Elizabeth Taylor and the press had, for a long time, quite a stormy relationship.

The photographers who were shooting at us were probably getting on her nerves. She quickly escaped from our group to lose herself amongst the other guests. Soon, the film's other star, her lover Richard Burton, said hello to me and joined us.The next morning, the Italian papers told of our encounter with all necessary ingredients to wet the reader's appetite for gossip :

jealous when she found out that I wore a dress too similar to hers, Elizabeth Taylor was supposed to have quickly turned away, asking that I immediately changed my outfit ! Even during a cocktail, the great actress continued to act as a queen of Egypt ! My photos in Richard Burton's company were fueling the rumors of a hypothetic rivalry...

In time, I understood how intelligently that sensitive and powerfull woman had learned to use the media racket to expose her ideas and the causes she believed in, wich made her as famous as her prestigious movie career.