The beginning of my english career

I have shot my most important films in the United Kingdom.
Today, they’re considered classics.
So, I thought it was important to explain under which circumstances I finally arrived at the famous Bray Studios.

First of all, I absolutely have to mention the elegant and witty George Sanders.
He introduces the TV drama « Women in love » in which I acted for the third time in English.
The success of that production led to bigger things… 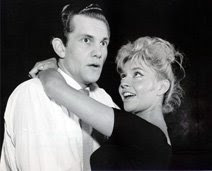 Daniel Massey
and me
in
THE STOWAWAY

In 1958, I am in Italy.
AVVENTURA A CAPRI is my eighth film over there.
The adventure will go beyond the screenplay, in an unexpected way.

Not far from the set, as I only have a few more hours of shooting left, the motor of the boat I’m on explodes and I am severely burned.

I have to spend a few weeks at the hospital. Everybody seems very worried for me.
But I manage to stay hopeful in spite of my critical condition.
My accident appears on the front page of newspapers and brings me what we call today a lot of media coverage.

After appearing in celebrity shoots, immortalized by photographers during prestigious happenings in the whirlwind of the Dolce Vita, I become overnight an object of curiosity in sensational news. The flip side of notoriety.

The esthetic sequels of the accident slowly disappear.
Back in Rome, I begin to dream of new perspectives.
By chance, my English agent calls me. INN FOR TROUBLE had not been a bad memory (1).
This time, it is a TV drama produced for the 3rd birthday of Associated Rediffusion, an ITV program contractor for London.
My partners will be Daniel Massey, and our host, George Sanders.
Who could think of a better company ?
Without regret, I leave the sweet light of the peninsula for the effervescence of the English Capital.
The bad experience of AVVENTURA A CAPRI has turned out for the best.

In spite of its title, WOMEN IN LOVE (2) has absolutely nothing in common with the D.H.Lawrence novel, though it also celebrates, in its own way, «eternal femininity ».
The teleplay consists of six short stories, linked by the witty introductions by George Sanders, who incarnates the « masculine dreamer ».

Sanders is, on and off stage, a gallant man who is never without his « so British » phlegm.
He is also, like all great actors of that era,
a cosmopolitan man.
Hearing that I had Russian origins on my mother’s side, he naturally starts to joke with me in an impeccable Russian.

Among the « women in love », we also find in the casting the Italian Scilla Gabel, soon to be Elfie Whal in the beautiful macabre Giorgio Ferroni film « MILL OF THE STONE WOMEN ».
The production is supervised by Peter Graham Scott, a seasoned TV director who will later bless Hammer Films with one of their best adventure movies, NIGHT CREATURES.

I am Felicity, the heroin of the last story, THE STOWAWAY.
Everything happens on a boat, off the Mediterranean coast.
Daniel Massey is a bachelor who occupies
the « honeymooners’ cabin ».
He is longing for a beautiful woman to share it with until he discovers Felicity, the stowaway.
A love chase follows, with the right touches of comedy.
I am mischievous and cheeky. My French origins bring just the right exotic touch to complete this portrait of a southern escapade (2).


So much for the script. Shooting is a different story.
We only have three days of rehearsal. We shoot the entire film on the fourth day.
We play the entire story at once, and it is ampexed (3) with several cameras, in the same way a stage play would be recorded. There is no « safety net ». We act as if on live television.
That pressure adds to the excitement we all feel.
My problem is to try and avoid a dialog approximation which made everybody laugh in rehearsal.
« I have to scrub the deck » invariably came out as « scrub… the neck » ! No matter how hard I tried, I kept blowing the line up to the last rehearsal.

Shooting time comes. The cameras follow me to my cabin and on the deck. I feel the sea rocking the boat. I am Felicity, off the French coasts.
Nothing else matters… and I forget my mistake !
Against all odds, I manage to limit my worries to the nautical aspects of the situation.

THE STOWAWAY brings me good reviews.
The charm of this light English comedy brings me to the attention of English producers who were looking for a young woman for a movie about the circus.
But not any circus : THE CIRCUS OF HORRORS (4) !

(1) INN FOR TROUBLE by C.M.Pennington Richards (1958). A spin-off of the successful sitcom THE LARKINS with Peggy Mount and David Kossoff.

(3) Derived from the trademark Ampex, a videotape recording system. 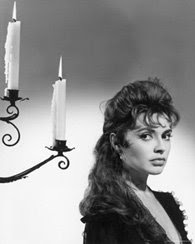