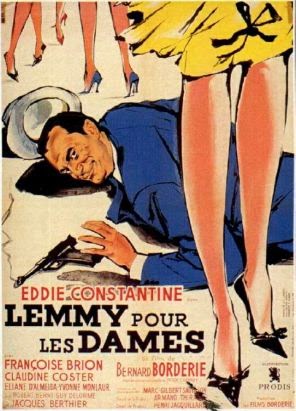 ( Lire la version française )
The first time I saw the American actor Eddie Constantine, it was in a movie house in his first big hit : Poison Ivy (La môme vert de gris - 1953).
The film, by Bernard Borderie, capitalized  on the public's enthusiasm for the American thrillers that swept the screens since after the war.
No genre ingredient was missing in this French production. Black and white photography, so typical of B pictures, the femme fatale , the mob racketeer, fist fights and vigilante FBI agent Lemmy Caution.
Eddie Constantine played the part again in several sequels including Ladies’ Man ( 1962) still directed by Borderie, with yours truly.
Borderie was a charming and humorous man. We had met during a dinner . He had promised me a part in his new film. I was to appear as Claudia, a supporting character.


Synopsis
Vacationing on the Cote d' Azur. Lemmy Caution meets several young women , three of whom are wives of important diplomats. One of them , Claudia, after provoking a fight , is discovered dying by Lemmy, who was supposed to meet her at the foot of a cliff. In a sound tape found at her side, she announced her intention to commit suicide. Lemmy  soon learns that another friend of his had died drowning six years before . but as he investigates the mystery that seems to link these sweet girls, Lemmy is subjected to threats and growing danger. He feels that , while seeming to want him to avoid the worst , his lady friends seek to mislead him. Are they victims? Lemmy remains convinced that one of the women is an accomplice of the blackmailer who, aware of the girlfriends’ secret (that they have finally revealed to Lemmy ), compels them to deliver informations obtained through their husbands. (Source: Unifrance )

I was delighted to find my way back to French movie studios, after playing in so many Italian comedies.


Borderie asked me to act with an Italian accent. It was not a problem for me.
I also had to drive a car, and that was something else. My only previous experience
was driving a jeep in the countryside. So I took some lessons in order to seem perfectly relaxed at the wheel during my few driving scenes.

We were shooting on the French Riviera . The restaurant "The fishermen’s house" had become general headquarters for cast and crew.
I shared billing with great actresses such as Françoise Brion, Eliane D'Almeida and Claudine Coster .
Armand Thirard , the chief cameraman, was struggling to remember our names when preparing set-ups. He started referring to us by a distinctive part of our outfit. He nicknamed me “the black feather” throughout the film, although I did not wear any. I had, however, a very short brown haircut that kind of looked like bird feathers.
Claudine Coster’s husband, Robert Manuel, was a resident of the “Comédie Française”. He used to come with her on movie sets. He was a true scholar and a very funny man that I liked very much, a fantastic storyteller. He captivated the cast and crew with countless anecdotes about Sacha Guitry and French theater.

Eddie Constantine was very courteous, but a man of few words. Someone who kept his distance between takes.
During my last scene with him, Lemmy Caution finds Claudia dead at the bottom of the cliff and decides to lift her body. Although the scene was a dramatic one, I still recall it with a smile. We had to reshoot several times, since the FBI agent had some difficulty raising me. Sandy soil did not provide sufficient stability to accomplish this perilous waterfall, and a chair had to be cleverly camouflaged to provide sufficient support In order for him to lift the body of the crime!

“License to kill” (Nick Carter va tout casser) by Henry Decoin, but this is another story ...